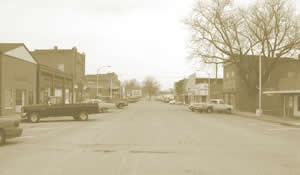 In 1914 C.W. Zeilman and others organized and promoted a second bank for Lake View, Iowa. The Farmers State Bank opened for business on October 12, 1914, with Ben Broughton as President. An "Auditor's Call" card dated March 28, 1916 indicates that John Zein was President, C.W. Zeilman was Vice President, and C. C. Denio was Cashier. It also named G.R. Spencer, Jos. Parkinson, F.W. Kolbe, Oliver Jensen, C.A. Ritter, and John Peper as members of the Board of Directors of the Farmers State Bank. It lists assets totaling $100,301.96.

In October of 1989 the Farmers State Bank held its 75th anniversary celebration at the Lakewood Ballroom. At the invitation of President, E.P. Kettering, customers were invited for an evening of food, fun, music, and dancing.
Farmers State Bank began as a Community Bank and continues today to advance the economic development and well being of the community by providing citizens and enterprises with quality financial services in ways and scope consistent with high professional and ethical standards, fair treatment for employees, and a fair and adequate return to the bank's shareholders.

We welcome your business!

Need a new car for work?  Or do you just want a new truck?  Let us help you get your new vehicle today.

Learn About Our Auto Loans